How real is reality? Are our images of the world mere inventions, or does an external reality correspond to them? Is it possible to know truth?

How real is reality? Are our images of the world mere inventions, or does an external reality correspond to them? Is it possible to know truth?
These are the questions that physicist and philosopher Heinz von Foerster and journalist Bernhard Poerksen debate about in their conversations. Together, they explore the borders of our capacity for knowledge. They discuss the seeming objectivity of our sensual perception, the consequences of “truth terrorism” and the connections between knowledge and ethics, sight and insight.

Heinz von Foerster, 1911–2002, was known as the “Socrates of cybernetic thought”. After studying physics in Vienna, he was employed by various research laboratories in Germany and Austria. At the close of the Second World War, he worked for a short time as a journalist and consultant for a telephone company. During this period he wrote his first book, Das Gedächtnis: Eine quantenmechanische Untersuchung [Memory: A Quantum Physical Study]. Von Foerster emigrated to the U.S. in 1949. There he was welcomed into a circle of scientists who came together regularly at the invitation of the Macy Foundation during the 1950s (Norbert Wiener, John von Neumann, Gregory Bateson, Margaret Mead, Warren McCulloch). Here cybernetic thought was given its shape.In 1957 Heinz von Foerster established the Biological Computer Laboratory (BCL) at the University of Illinois, where he had a professorship until his retirement in 1976. The BCL served as a venue for meetings of avant garde thinkers from all over the world.

Bernhard Pörksen, Prof. Dr., studied German studies, journalism and biology. He was working as a journalist for several years. Today he is professor of media studies at the University of Tuebingen/Germany. He was awarded a Ph.D. for a thesis on the language of neo-Nazis.Together with Heinz von Foerster he wrote the widely noted book Understanding Systems. Conversations on Epistemology and Ethics.

There are no reviews yet.

Be the first to review “Understanding Systems” Cancel reply 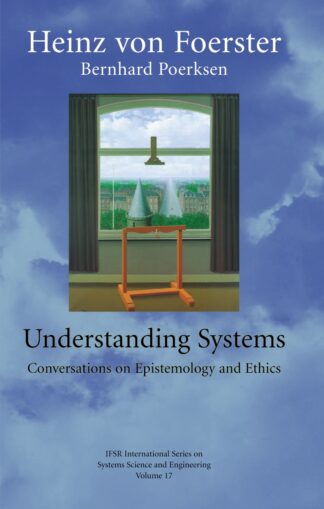 You're viewing: Understanding Systems 10,00 €
Add to cart
We use cookies to ensure that we give you the best experience on our website. If you continue to use this site we will assume that you are happy with it.OkPrivacy policy